The Vape-Free School Project: An Education Initiative to Address e-Cigarette Use Among High School Youth

The Vape-Free School Project is a school and theory-based5 education program to increase knowledge, influence attitudes, and decrease likelihood of using e-cigarettes among teenage youth in the state of Rhode Island. The program consists of a 1-hour interactive workshop for high school students. The workshop was developed by two medical students using input from local health teachers and based on results from in-depth qualitative interviews with ten community key informants.

The workshop begins with an introduction to the history of tobacco companies in the United States, and a brief 15-minute review of the health consequences of cigarette smoking. It proceeds with a 30-minute facilitated discussion about e-cigarettes. The facilitator guide is based on principles of motivational interviewing and structured around five broad, open-ended questions (Box 1). 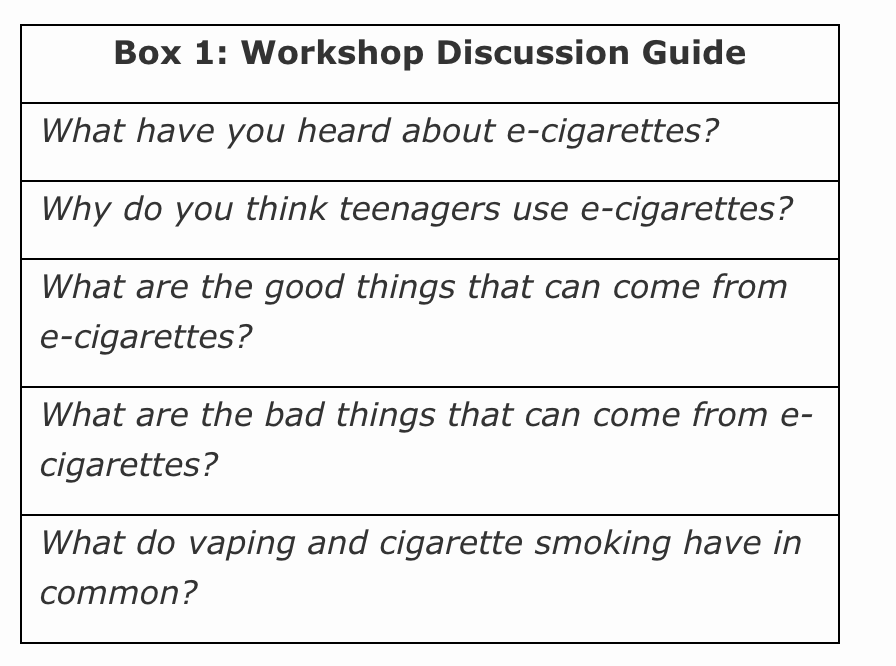 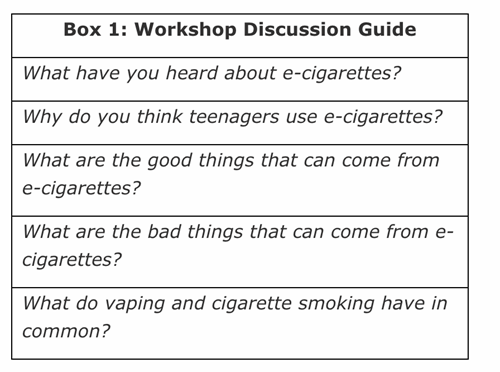 Included in the guide are references to e-cigarettes in pop culture and additional prompts to encourage student participation. The workshop is designed to cover topics such as the dangers of e-cigarette use among teens, the effects of nicotine on the developing brain, the potential harms of second-hand vapor, and key concepts such as dependence, tolerance, and withdrawal. The last 15 minutes of the workshop is intended to provide education around communication, refusal, and other social skills to help youth handle peer pressure. Skills are reinforced through role playing exercises. A feedback survey is given to each student to complete at the end of the workshop.

Program Impact–Preliminary Results
We implemented the intervention workshop in two Providence-area high schools, reaching a total of 105 students through six workshops. Sixty percent of students (n=63) were in tenth grade, and the remaining in ninth grade (n=42). More than half of the students (n=57, 54%) identified as male. The mean age was 15 years. See Table 1 for students’ baseline tobacco beliefs and behaviors.

The overwhelming majority of students (98%, n=103) reported feeling more knowledgeable about e-cigarettes after the workshop. Fifty-six percent of students (n=58) indicated that their attitudes towards e-cigarettes had become less favorable, while 38% (n=40) reported their attitudes did not change. Among the students who reported no change in attitudes, 82% (n=33) indicated e-cigarettes were unsafe and 90% (n=36) had never used an e-cigarette. Nearly all students (98%, n=99) reported they were less likely to use e-cigarettes in the future as a result of the workshop. Furthermore, most students agreed that they “enjoyed the workshop,” that “the material was presented in an organized manner,” and that they “would recommend the workshop to other students.”
Teachers were also highly satisfied. One teacher stated, “the class was highly engaged and interested in the topic, the information was accurate and presented in a way to encourage questions and maximize participation.” Another commented, “the information provided was able to empower students with facts and dispel many of the myths that students believe to be true about these products. The students seemed to be hanging on every word of the workshop facilitators. I was very glad my students were able to participate.”

Just the Beginning
Our preliminary results suggest that a brief school-based workshop can improve students’ knowledge and attitudes about e-cigarettes, and reduce their likelihood of using these products in the future. We are motivated by health teachers’ receptivity to partnering with medical students, and the immediate impact this project had on students as well as our own education as future health care providers. In the upcoming months, we will seek to establish partnerships with additional schools, and involve more medical students in this effort.

August 8, 2022: The Bishop Society Self-Nominations Due

August 15, 2022: The STFM Board of Directors' Self-Nominations Due

August 29, 2022: Applications for Faculty Position with Emerging Leaders Fellowship Due

September 15, 2022: Proposals to Present at the 2023 STFM Annual Spring Conference Due

October 15, 2022: Nominations for the STFM Diversity Award Due

October 21, 2022: Applications to Serve on the 2023 STFM Foundation Board of Trustees Due

October 31, 2022: Applications to Receive Funding with the STFM Project Fund Due